New life for the new year. Lots of fluffy ducks! 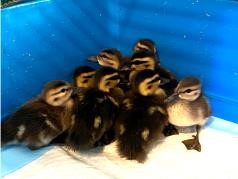 Any hollow won't do!

A pair of rosellas could not find a tree hollow, so they decided to try a roof cavity.

Unfortunately, their nestlings fell down into the wall cavity. Luckily the home owners were kind enough to put a hole in their wall to rescue the youngsters.

Our youngsters are now known as Wally and Cavannah. They arrived on 1 December and are growing fast. They coloured up quickly and grew feathers. Soon they will move to the aviary. 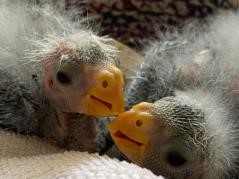 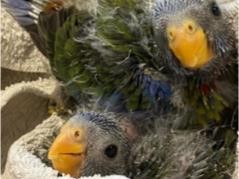 The recent storms have seen quite a few animals come in for rehab, especially young birds.

Hermin, a Magpie-lark, came into care looking quite under the weather. A member of the public found him on the ground suffering from exposure and gave us a call. Hermin is doing so well, he is now known as Big Hermin. He loves his food and the company of Little Hermin (on the right in image 2).

The Magpie-lark is colloqially known as Pee Wee because of its call. Pee Wees spend most of their time on the ground searching for insects & their larvae, as well as earthworms & freshwater invertebrates.

The Hermins should be ready for release once they have grown some more. It doesn't look like it will take too long!

The Hermins are now a trio, with Junior for company (on the left in the images below). As soon as Pip is big enough to perch they will be a quartet! 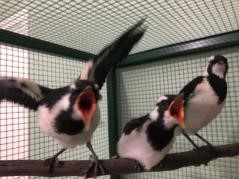 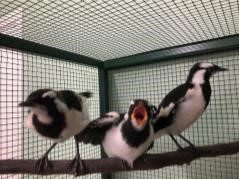 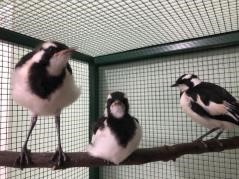 You may want to participate in the Aussie Backyard Bird Count. 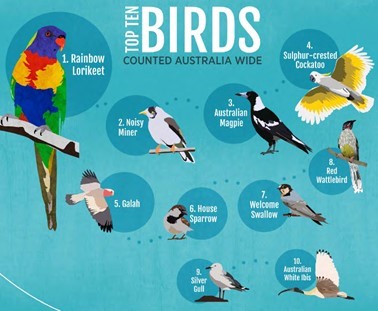 
For those of you interested in more information, including the history of National Bird Week, you may want to head over to Birdlife Australia. 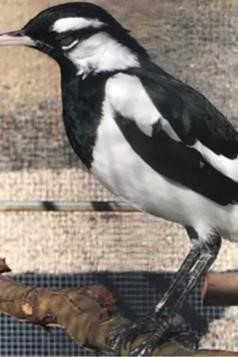 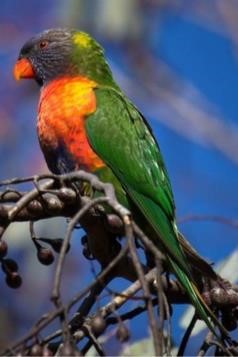 Spring has arrived and that means baby birds!

You will hear plenty of advice saying:

leave it where it is, the parents will look after it.

Often this is not the right approach and can result in baby birds dying unnecessarily.

There are many things to consider when deciding whether to leave it where it is:

Even if the parents are feeding it, if the baby bird remains on the ground when the parents fly off to roost at night, it will likely be taken by a predator or get cold and become unwell.

Sometimes it is possible to place the baby bird on a branch, but often they end up back on the ground.

For these reasons we often bring a baby bird into care to keep it safe. Usually, within a few days, but sometimes weeks, we are able to reunite the baby bird with its parents.

If you come across a baby bird, before you make a decision to leave it where it is, please call our 24/7 Wildcare Helpline  6299 1966, anytime of day or night. One of our experienced bird rescuers will be available for advice and we are more than happy to visit to check on the baby bird.

The top three most common species were:

The top two reasons for birds coming into care were:

Unfortunately, 692 of the birds that came into care died or had to be euthanised. The majority of those euthanised had injuries that meant they could never be released or had diseases from which they would never recover (eg. Beak and Feather disease).

On a happier note:

We were able to reunite or rehome a number of escaped pet birds. This included a Rainbow Lorikeet, a Budgerigar, a Chicken, an Alexandrine Parrot, a Galah, a Muscovy Duck, a Zebra Finch and a couple of Pigeons. 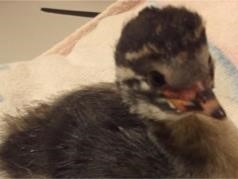 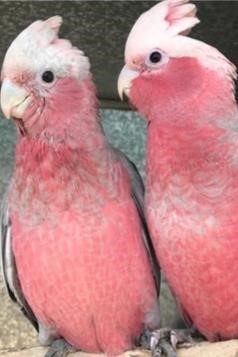 Choose Wildcare when buying Goodwill Wine & we receive 50% of the profit from your purchase. 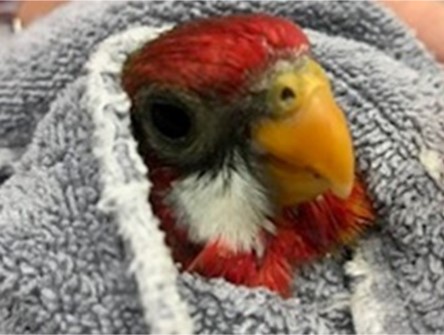